Alison Roberts studied ancient Egyptian and Akkadian at the University Of Oxford. She completed her doctoral thesis 'Cult Objects of Hathor' in 1984. Since then she has written and lectured on ancient Egypt.

She lives in Brighton, England.

Purchase My Heart My Mother

Purchase in the USA

Richly illustrated in colour throughout, this groundbreaking book reunites alchemy and ancient Egypt within the western Hermetic tradition.

Ever since Tutankhamun's golden shrine was discovered in his treasure-filled tomb at Thebes its intimate scenes of the young king and his wife Ankhesenamun have both delighted and perplexed. Are they personal? Are they for the afterlife? In Golden Shrine, Goddess Queen, the author radically reinterprets this sensual imagery, uncovering the queen's divine incarnation as the fiery solar Eye goddess Hathor-Sekhmet. She also brings to light the little-known New Year anointing ritual which underlies the couple's every gesture. Weaving together royal love and temple ceremony, this iconic shrine gloriously celebrates the 'queen of the South' and her empowering vitality. For centuries these New Year feminine rites sustained Egyptian cultural life. The book goes on to explore how they evolved into the Christian anointing mysteries, as recorded in the New Testament gospels; and their continuity in the alchemically inspired Gospel of Philip from the Nag Hammadi cache of secret writings. Beautifully illustrated in colour throughout, this far-reaching book reveals the inspiration early Christians drew from Egypt's ancient wisdom.

Illustrated with a cover showing the great mother goddess Isis shaking her sistrum to create harmony in the netherworld of Osiris, this book explores the power of the Egyptian goddesses in the cycle of death and rebirth.

The author recreates the rich and complex temple life of New Kingdom Egypt in a compelling account of the Ancestor Ritual, a little known royal death and rebirth ceremony. Taking the reader on a journey through Seti 1s famous temple at Abydos she shows how the temple was built as an image of heaven, mirroring the cosmic 'maps' of living and dying depicted on the remarkable Nut ceilings in Theban royal tombs.

The latter part of this richly illustrated book is taken up by stimulating discussion of the survival of Egyptian religion, tracing its profound influence on alchemy and presenting fresh evidence to support the alchemists' own belief in the Egyptian roots of their tradition. 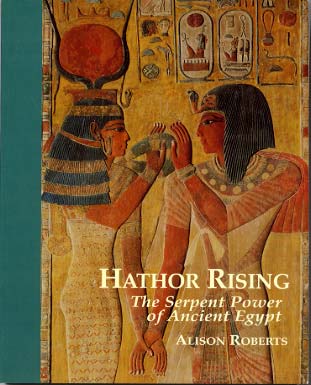 Drawing together temple art, myths, rituals and poetry Hathor Rising explores the feminine aspect of the ancient Egyptian pantheon, especially the pivotal place of the fiery serpent-eye goddess, Hathor-Sekhmet. The importance of the goddess is emphasized by the serpent coiled on the brow of every Pharaoh, the supreme symbol of power in ancient Egypt. Alison Roberts explores the symbolism behind this and other manifestations of the goddess in Egyptian cosmology, and, in so doing, she provides a powerful new perspective on women's theology. Hathor Rising also takes a close look at the reign of the innovative female Pharaoh, Hatshepsut, who laid the foundations for the ecstatic, heart-centred splendour of New Kingdom Egypt. And it goes on to explain how much of this serpent tradition was suppressed in the controversial reign of Akhenaten. Filled with striking and unusual illustrations, Hathor Rising weaves together original research with a wide range of sources never before available to the general reader.